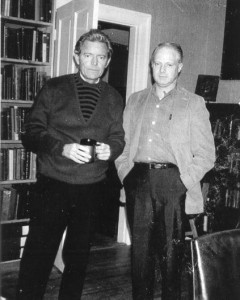 The two persons most directly involved in creating the American Osler Society were John P. McGovern, MD, in Houston, Texas, and Alfred Henderson, MD, in Washington, DC. The mid- to late-1960s were the formative years.

The men were then unacquainted and the idea came to them independently. Each had confided in Dean Wilburt C. Davison of Duke and he brought the two men together. As were many others, they were concerned about the prevailing emphasis on science in medical education. This emphasis seemed in turn to result in less humaneness in the medical profession. Technology threatened to substitute for caring. A humanist role-model was needed, and who better than William Osler? 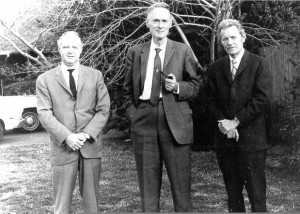 McGovern and Henderson agreed to work together to create an Osler society. Houston became the birthplace, Jack McGovern the man-midwife. Meetings were held in Houston, other interested prospective members were brought in, and in 1970 a decision was made to proceed.

The first slate of officers included Dr. William B. Bean, then Sir William Osler Professor of Medicine at Iowa City, summoned from a tennis court to be invited to become the first president. Bean accepted, and returned to the court. 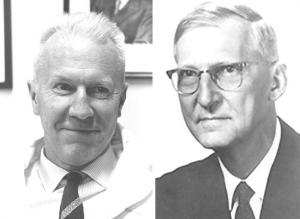 Dr. George Harrell became first vice-president (and thus president-elect), Dr. Tom Durant second vice-president, and Dr. Ed Rosenow, Jr., Secretary-elect. McGovern was the first Secretary, Henderson the Treasurer-Historian. This last position was, in 1974, transformed into the current Secretary-Treasurership. In the year 2000 the position of Historian was created. 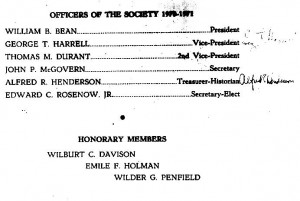 A meeting devoted to humanism and medicine, planned for Galveston, Texas, in the spring of 1970, became a sort of informal first meeting of Oslerians in advance of the Osler Society.

The statement of purpose of the fledgling organization was as follows:
“The purpose of the Society is to unite, into an organized group, physicians, and others allied to the profession, with a common interest in memorializing and perpetuating the lessons of the life and teachings of William Osler; to meet periodically for the purpose of presentation and discussion ofpapers on the life and influence of Osler upon the profession, and to publish these essays as a Proceedings of the Society; to continually place before the profession a reminder of the high principles of life and humanism in practice of Osler, and to introduce these things to those entering the profession.”

It was decided not to establish a journal. A separately published Proceedings likely would have a small circulation. Spreading the word about medical humanism could be more effectively done by having papers, delivered at the annual meetings, published in different journals in North America and abroad. 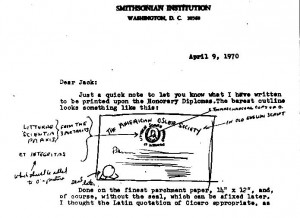 In February 1970, the Board of Trustees first met. At that time the Board of Governors and the Charter Members were elected. A constitution was drawn up. And the three Rhodes Scholars who had been Osler’s students at Oxford — Dr. Wilburt C. Davison, Dr. Emile Holman, and Dr. Wilder Penfield — were named Honorary Members. 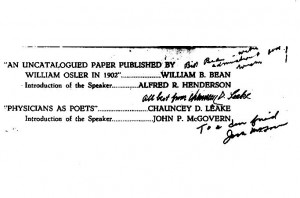 The initial formal meeting of the AOS was held in Denver on 1 April 1971. President Bean presided; nine of the original thirty members attended. Membership diplomas were presented at the business meeting. Later, an open meeting was attended by about sixty interested members of the American College of Physicians.The next year the Society met in Montreal in conjunction with the American Association for the History of Medicine. The ACP and the AAHM have continued to be friendly neighbors for the AOS. And as the Montreal program of 1972 showed, the group had already begun to grow. Instead of two papers there were four. In Bethesda, in 2000, the program included 33 papers, a seminar, and a panel discussion.